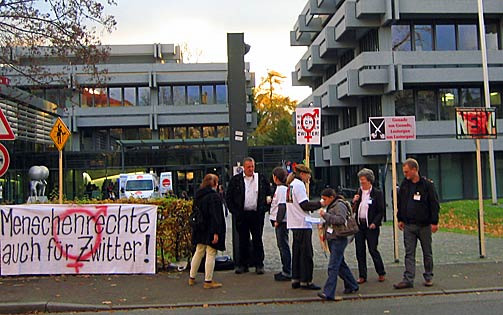 Zwischengeschlecht.org
Human Rights for Hermaphrodites too!

Currently several intersex/D$D guidelines issued by doctors and medical societies from Germany, Austria and Switzerland are being revised, including "174/001 Disorders of Sex Development", "027/019 Prenatal Therapy of Congenital Adrenal Hyperplasia due to 21-Hydroxylase Deficiency", "006/026 Hypospadias". According to advance versions and public statements by representatives, all guidelines continue advocating non-consensual, medically unnecessary, irreversible, cosmetic genital surgeries on children with variations of sex anatomy, as well as sterilising procedures and imposition of hormones. There is no or only minimal consultation of intersex people and their organisations.

These guidelines will also affect the practice not only in other European countries, but most likely also the current Chicago "consensus" revisions. Therefore, we're calling for international support:

We are going to hand in/send via snailmail an Open Letter in German to all participating doctors and medical societies next week on occasion of our peaceful protests in Leipzig and Jena. You can find the German draft (PDF) here.
For all of you who don't speak German but want to know what's in the letter, the contents are virtually identical to our ESPE 214 Open Letter (PDF). Except that the guidelines letter is in German and aimed at the guidelines, and with German state bodies calling for legislation against non-consensual intersex treatments added to the list of human right and state bodies criticising non-consensual treatments (p 2-3 in the ESPE letter).

Please send us an email [ to presse_at_zwischengeschlecht.info ] with your name, city, country, and (if applicable) organisation so we can add your name to the list of signatories in the Open Letter!

(In case you want to sign the letter not on behalf of your organisation, but in personal capacity, just add something like 'Personal Capacity, Affiliation given for identification purposes only' behind your name and organisation, and we'll add this in German in the letter.)

Feel free to spread this invitation to other parties and individuals concerned! So there will be as many signatures as possible.

Please respond quickly! Thanks for adding your signature to let the doctors know that it's NOT OK to cosmetically alter children's genitals!

Intersex Genital Mutilations
Human Rights Violations Of Children With Variations Of Sex Anatomy
2014 NGO Report to the UN Committee on the Rights of the Child (CRC)
>>> Download PDF (3.65 MB)     >>> Table of Contents

Published on Monday, November 3 2014 by nella